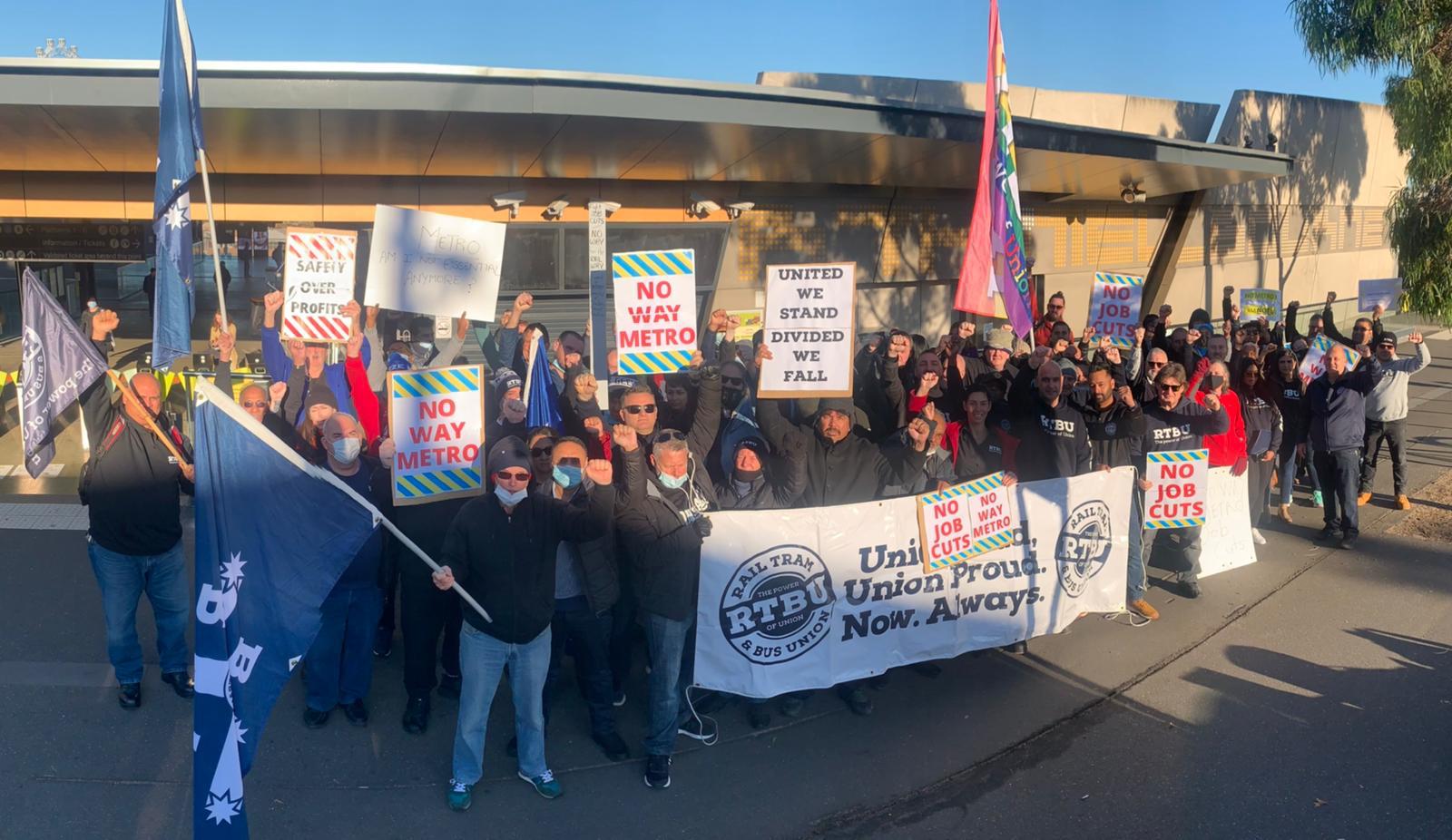 The RTBU is fighting back against Metro’s proposed cuts to frontline staff. Having received millions of dollars in support payments from the Government through COVID, Metro are seeking to restructure long standing employees out of their jobs.

The Union has been organising meetings, campaigns actions and public pressure to hold Metro accountable. Keep up with the campaign at the following link: www.rtbuvic.com.au/no-way-metro/

No worker deserves to be abused at work. When trains are cancelled or delayed, or simply people are disgruntled by the transport operator, often this anger is taken out on the human face that might sell tickets or provide customer service.

Public Transport workers are proud of the work we do and want to feel safe in serving the community. Therefore, the RTBU is running a safety campaign to pressure the Victorian Government to introduce legislation and minimum sentencing for assaulting a public transport worker.

While this only affects a minority of the population, this legislation will make a big difference to our members safety on the job.

With over 150 assaults on front line public transport workers in the past two years, it is time action was taken to protect you, the workers who keep the system moving. Unfortunately, the RTBUs calls for increased safety measures such as two-up Conductors and Barrier Staff have been ignored and rejected by both Government and the companies.

While safety should be the number one priority, it seems that profits are once again coming first, and the safety of RTBU members, public transport workers is being put at risk every day.

In Victoria, Emergency service workers who engage with the public are protected by strict legislation and heavy penalties. It’s time this is applied to essential services too!

Unfortunately, in the last week we have seen this legislation blatantly ignored by a Judge who came to the decision that two women who severely assaulted an ambulance officer would not be jailed for their crimes. This is an absolute disgrace.

A roadshow of meetings is currently occurring across the network in both V/Line and Metro to inform members and brief them on the campaign. At these meetings, workplace motions have been passed and petitions signed by staff at those locations.  Along with this, the RTBU will also be putting up the below motion at this weekend’s ALP State Conference.

Customer service workers across our public transport network do an important job ensuring passengers can easily use the system, offer any support necessary and help manage disruptions to keep the network moving.

While these customer facing roles offer many benefits to our community such as enhance the amenity of the network to all passengers, improve the interface between the public and the transport operator, and ultimately stand as the human face of our sustainable public transport system, it is front line service staff that are too often on the receiving end of abuse from a dangerous minority of the travelling public.

Recent years have seen a spike in abuse towards front line public transport workers. In the past two years alone over 150 incidents have been reported leaving customer service staff feeling more vulnerable than ever. Whether it be verbal, physical or psychological abuse, no worker deserves to be subjected to such pressure in the workplace.

Following failures of employers to address these matters within their organisations Victoria must take action to protect these vulnerable employees in their public workplace in order to not only support the safety and amenity of our public transport network, but also ensure that public workplaces are safe workplaces.

Noting the growing impact and danger imposed by assaults on front line staff across our public transport network, this Conference calls on the Victorian government to legislate tougher protections and fund a public awareness campaign to support front line public transport workers. Safety at work must be the number one priority, and this matter is of urgent importance.”

If you are wanting to get involved or hear more about the campaign, please contact the Union Office on 8630 9100. 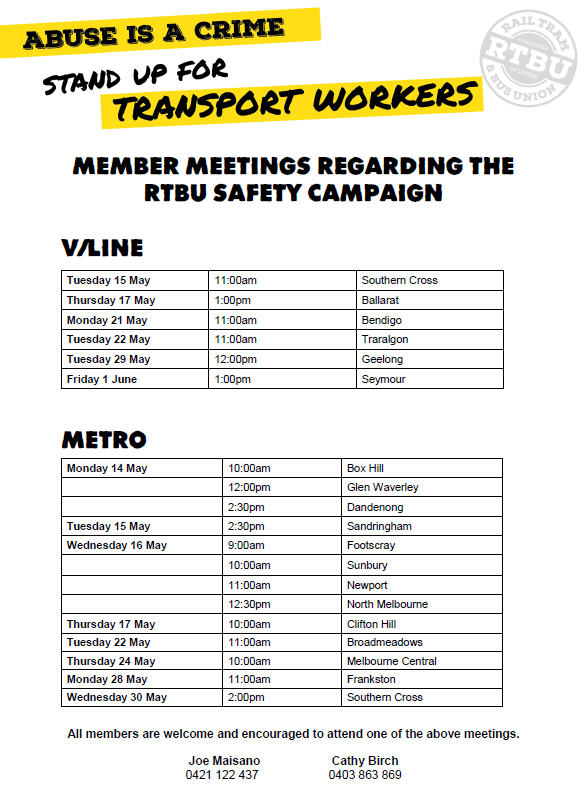 Unfortunately, in the Public Transport Industry, and especially in front-line roles, our members face serious safety risks on a daily basis.

As I’m sure many members are aware, the RTBU has long been campaigning for two-up on all Barriers across the network, and for Conductors on all V/Line Services. While the calls for two-up have continued to go unanswered, the RTBU searched for another way forward to help protect our front-line workers.

The RTBU is currently lobbying the Victorian State Government to introduce harsher penalties for assaulting a Public Transport worker.

Currently there are penalties that exist for assaulting emergency workers such as police officers, protective service officers, operational staff within the meaning of the Ambulance Services Act 1986, a fire-fighter, and other emergency workers listed in section 10AA(8) of the Sentencing Act 1991 (Vic). The minimum penalty is a 6 month term of imprisonment for a person who intentionally or recklessly causes injury to an emergency worker on duty.

Following the introduction of this legislation, along with effective state funded publicity, many of these workers have reported improvements in their experience at work. Public Transport workers are no different and deserve this same respect that Emergency workers do.

The South Australian Government has introduced penalties for assaulting Public Transport workers which sees perpetrators facing up to 25 years imprisonment. The time is now for the Victorian State Government to leap into the 21st century and protect the workers who keep our transport system moving each day.

It is time for our State Government to come to the table and do what is necessary to protect Public Transport workers. The time is now.

We will continue to update members on the campaign and with any progress in this space.

If you have been assaulted at work or are experiencing violence related issues (verbal and non-verbal) in your workplace, please contact the RTBU on 8630 9100 or at safety@rtbuvic.com.au to log an incident report.

For further information and to view the letter sent to Minster for Public Transport Jacinta Allan, click here.

Welcoming in 2018 and once again Metro are in the spot light with the proposed removal of Control Desks in the Clifton Hill group of stations. That means no Control Desk staff at any locations within that group. By getting rid of the Senior Station Officer roles, it removes the in-depth knowledge and understanding of the surrounding local area, for example passenger assistance, attending to emergencies on the platform, on the train and having staff there readily accessible if things go wrong.

On the job meetings have occurred over the last few weeks at the four Control Desk locations being Reservoir, Clifton Hill, Eltham and Heidelberg Stations. It was a great turn out from members at many of these meetings, with many members turning up in their own time. Members who are not Control Desk operators attended to support their colleagues in this attack on jobs, and to protect jobs within the station grade. There has been a great show of support from station staff across all groups in this fight that the Clifton Hill group are currently facing.

This proposed closure of the Control Desks is currently in Dispute, with Metro Management reluctant to pick up the phone to work this out. This is nothing new and it shows the lack of consideration that Metro have towards their staff and family members whom it will affect the most.

The RTBU and our members take this very seriously and will do whatever is in our power to support members and ensure that no jobs or conditions are lost. So, to all the members in the station grade, support your colleagues in the Clifton Hill group, make this your fight as well because in the long term, it will be affect all groups. To the wider membership of the RTBU outside the station grade, please make it your business to support your fellow comrades.

The Rail industry is not utilised as an industry business where it must please its shareholders, it is an essential necessity for the public and will always remain this way. 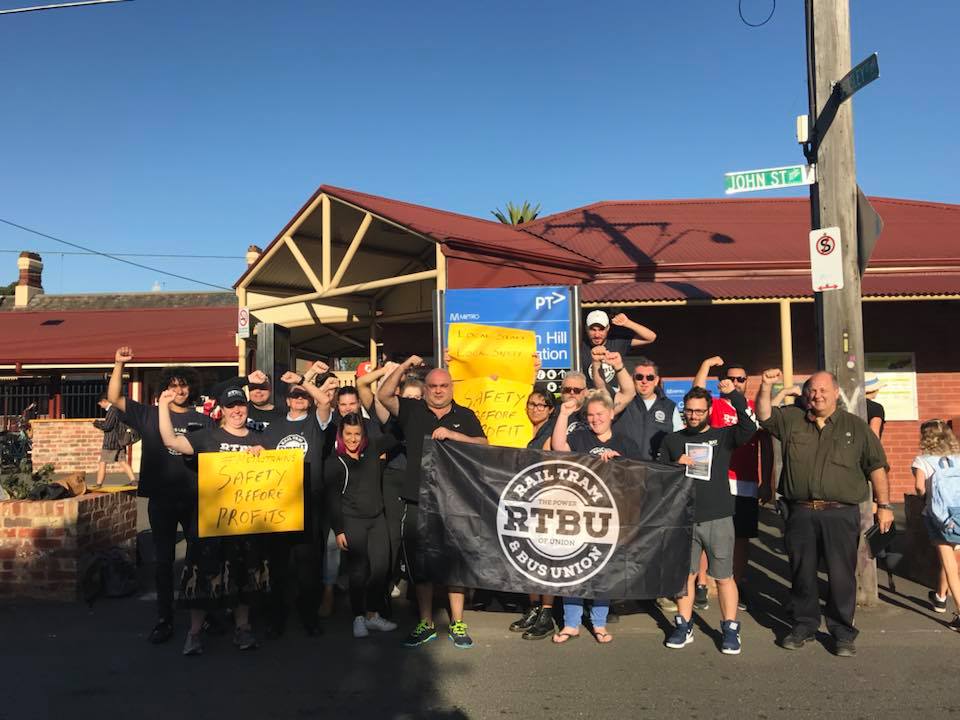 The Transport for All coalition is a group of disability advocates with a keen interest in transport. The RTBU has been … END_OF_DOCUMENT_TOKEN_TO_BE_REPLACED

V/Line are at it again!  This time it’s in Bendigo where management have taken it upon themselves to completely ignore … END_OF_DOCUMENT_TOKEN_TO_BE_REPLACED

NO WAY METRO! The RTBU is fighting back against Metro's proposed cuts to frontline staff. Having received millions of … END_OF_DOCUMENT_TOKEN_TO_BE_REPLACED