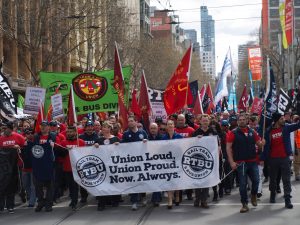 The right to strike and withdraw our labour, the right to say “no”, is a fundamental and basic human right that has been eroded in Australia, and too often completely denied.

As an issue important to many RTBU members, most recently, the union hosted and supported meeting of rank and file unionists across the movement to further develop and support the campaign. This is a conversation occurring at all levels at unions across Australia with rank and file members key to identifying and finding solutions to these problems. Thanks to all those who have called and/or emailed me to discuss ideas and experiences.

RTBU members across the country are aware of and conscious of the impacts these attacks have on bargaining and how we can demand a fairer workplace day to day. We need not look further than a handful of issues in our own backyard:

These issues have been naturally compounded in recent years through the efforts of anti-worker Federal Minister for Employment Michaelia Cash providing support to companies looking to steal working conditions and attack wages, and the Minister for Public Transport Jacinta Allan trying her best to look “tough on unions”. While we were successful in fending off this challenge in Victoria, our comrades in New South Wales at Sydney Trains were less successful, having their industrial action completely terminated.

If you ask the bosses, they’ll tell you that this system is working beautifully. “A well oiled machine” they might say. But the reality is that this sample of issues in our back yard (the tip of the iceberg) is exactly why Unions are banding together across the country to change the rules.

In the current ongoing struggle between Victorian workers and global oil and gas giant Exxon Mobil, the workers at Esso Longford have been indiscriminately sacked and offered their jobs back at lower pay. This is the same technique used by CUB when they sought to use this system to slash wages at the brewery in Abbotsford. These workers have had injunctions placed on them and seen alternative labour crews brought in to do their jobs. This strategy of terminating enterprise agreements was first tested by the bosses at Aurizon rail in Queensland and has been exploited by employers across the country ever since.

If we are to be deprived of a genuine right to strike, and then also face the potential to have our long negotiated enterprise agreements terminated, it is clear the rules are broken.

The Australian Council of Trade Unions (ACTU) held their triennial congress last week where these issues were discussed through a national perspective, identifying what issues have been encountered by unions across the country, building on the campaign to Change the Rules. With unions all united on this campaign, the corporations that think they govern Australia are on notice.

Workers and unions understand the power of unity when fighting a common enemy. Whether it be against an individual manager, company, an employer association or a government looking to undermine workers rights and conditions, unity and commitment to the fight is what will deliver results.

Corporate Australia has always sought to kick workers and their unions around, but united in our message and strategy we will fight them as one big “well oiled (justice) machine”.

The Transport for All coalition is a group of disability advocates with a keen interest in transport. The RTBU has been … END_OF_DOCUMENT_TOKEN_TO_BE_REPLACED

V/Line are at it again!  This time it’s in Bendigo where management have taken it upon themselves to completely ignore … END_OF_DOCUMENT_TOKEN_TO_BE_REPLACED

NO WAY METRO! The RTBU is fighting back against Metro's proposed cuts to frontline staff. Having received millions of … END_OF_DOCUMENT_TOKEN_TO_BE_REPLACED