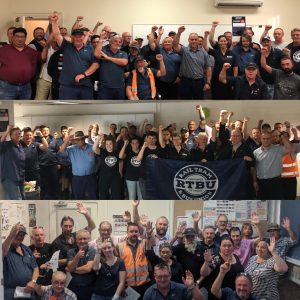 Members of the RTBU have a long memory of the varied attacks by V/Line, its Board, Management and Governments.

When under pressure or under attack, Rail workers know how to respond and stand together to fight to protect and advance working conditions.

In this campaign against V/Line’s attack on the V/Line Rail Operations Enterprise Agreement (EA) 2015 – 2019, members demonstrated a formidable amount of unity and strength.

This attack from management was direct. It was targeted and it was cunning. It was your collective unity that stood against management and sent a clear message.

The results of the voting showed an outstanding 92% of employees taking part in the vote. Of that 92%, an incredible 82% of employees who voted, voted NO against changes to the EA. This means that there will be no amendments made to the V/Line Rail Operations EA 2015 – 2019.

Never has a union united so well to defend hard won conditions!

We are able to win these fights because your work is critical to the functioning of our public transport system. When we speak as one management must listen!

Thank you to the members who got involved in the VOTE NO campaign to push such a strong message.

Thank you to the Delegates, Members, Retired Members and supporters who went above and beyond, assisting with getting the message out there. To everyone who made phone calls, to all the people who attended mass meetings and to all the people who helped spread the word. It was an all-round joint effort and without the support of the entire membership, this win to protect your EA wouldn’t have been possible.

This attack will be etched into our memories as we continue to struggle for the respect and dignity we deserve as public transport workers.

In unity comes strength and this fight shows the great strength of the RTBU when all grades unite.

This is your union and this win is yours!

10 February 2022 Dear Members, I am writing to inform you that after 12 years of representing RTBU Members, … END_OF_DOCUMENT_TOKEN_TO_BE_REPLACED

In what begins to define a new low for Metro, the RTBU has been forced to lodge a dispute over the company’s refusal to … END_OF_DOCUMENT_TOKEN_TO_BE_REPLACED

NO WAY METRO! The RTBU is fighting back against Metro's proposed cuts to frontline staff. Having received millions of … END_OF_DOCUMENT_TOKEN_TO_BE_REPLACED