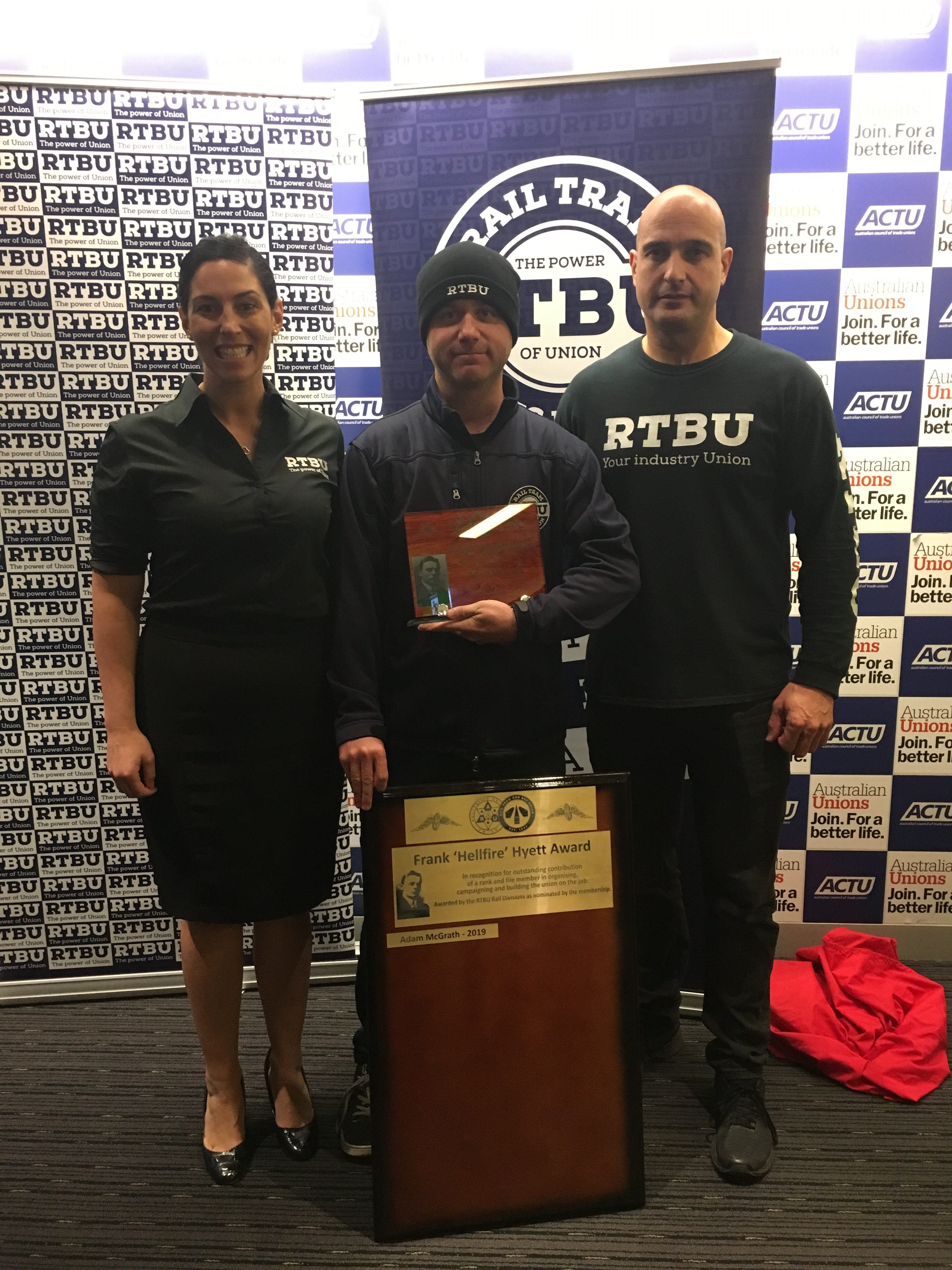 This year, RTBU Officials, Members, Delegates, family members and other comrades gathered for two events to commemorate and remember the life of the great Frank Hyett, socialist, militant unionist and inaugural secretary of the Victorian Railways Union from 1911-1919.

Frank Hyett (1882-1919) was a fighter for the working class for his entire life. Entering the workforce aged 13 to support his widowed mother and siblings, he soon became an activist in the Victorian Socialist Party (VSP), a radical working class political party which set itself against the whole of the capitalist system and class society and sat to the left of the Labor Party. In 1910, Frank joined the Amalgamated Society of Railway Engineers as an Organiser and hit the ground running – his energy, zeal and dedication to the role saw him rise to become the Society’s General Secretary just two months later.

Frank shared the vision of establishing one united, industry-wide railways union to unite all railway workers and collectively advance their wages and conditions and real down the barriers of the smaller craft-based unions which left them divided, weakened and at the mercy of employers.

Frank’s ambition came to fruition in July 1911, when an overwhelming majority of organised railway workers voted by plebiscite to amalgamate into one Victorian Railways Union. The VRU prefigured the Australian Railways Union formed in 1920 and with Frank assuming the VRU’s secretaryship, Victorian general railway workers made huge strides advancing their rates, conditions and standing on the job. This was no easy feat as it was then illegal for railwaymen as public servants to strike.

With the coming of World War I in 1914 and the attempts by the treacherous government of Billy Hughes to impose conscription for Australia’s armed forces, Frank threw himself into the labour movement’s struggle against conscription. He served on the Victorian Trades Hall Council’s Anti-Conscription Committee and contributed much to the triumphant defeat of both referenda to introduce conscription in 1916 and 1917.

Frank Hyett tragically died on April 25th, 1919, struck down by the pandemic of the Spanish influenza, aged only 37. He was survived by his wife and fellow Socialist, Ethel and their three children. His funeral procession from Melbourne to Box Hill Cemetery was flanked and attended by thousands, and when the train carrying his coffin arrived at Box Hill the local cricket team playing on the green paused their match in silence.

Frank had been a champion footballer and cricket player, rising to a first league cricketer on the Victorian Cricket League at the time of his death. Such was the way working class people and their leaders enriched their communities in all walks of civic life. Frank is also notable for his close friendship with John Curtin, then a fellow VSP activist and anti-conscriptionist fighter who would become Australia’s wartime Labor Prime Minister during World War II. Hyett was perhaps Curtin’s closest male friend of his lifetime, and his death left him utterly devastated.

We have also created an award in honour of Frank Hyett which will be awarded annually to one recipient who has made an outstanding and meritorious contribution to our collective. An RTBU member who has time and time again shown their dedication to the Union through hard work, persistence, comradery and leadership.

The first recipient of this award was Adam McGrath. Adam is the Delegate for Pacific National (PN) Melbourne Freight Terminal and was instrumental in the negotiations for PNs Enterprise Agreement (EA) which is a National Agreement covering freight terminals across the country.

Adam is hard working, staunch and dedicated to the cause, travelling across the entire country for the EA Vote No campaign when a shonky deal was offered to the members by PN. In a difficult and toxic company, Adam has excelled as Delegate and through his and many other Delegates and Officials hard work, a 90% vote against the proposed agreement was achieved.

I was proud to present Adam with the award on Thursday 2 May and I look forward to continuing to support Adam fighting the good fight.

Further, in paying our respects to Frank Hyett’s life and struggle, the RTBU and our members must always reaffirm its’ significance: a faith of action in the working class and its ability to organise and fight for its rights and dignity, and a belief in the cause of socialism, peace and solidarity as the working people’s rightful rewards. In an Australia and world more beset by social inequality, exploitation, injustice and war than ever before, the lessons of Frank Hyett are all the more salutary.

Frank Hyett, your memory lived on.

10 February 2022 Dear Members, I am writing to inform you that after 12 years of representing RTBU Members, … END_OF_DOCUMENT_TOKEN_TO_BE_REPLACED

In what begins to define a new low for Metro, the RTBU has been forced to lodge a dispute over the company’s refusal to … END_OF_DOCUMENT_TOKEN_TO_BE_REPLACED

NO WAY METRO! The RTBU is fighting back against Metro's proposed cuts to frontline staff. Having received millions of … END_OF_DOCUMENT_TOKEN_TO_BE_REPLACED