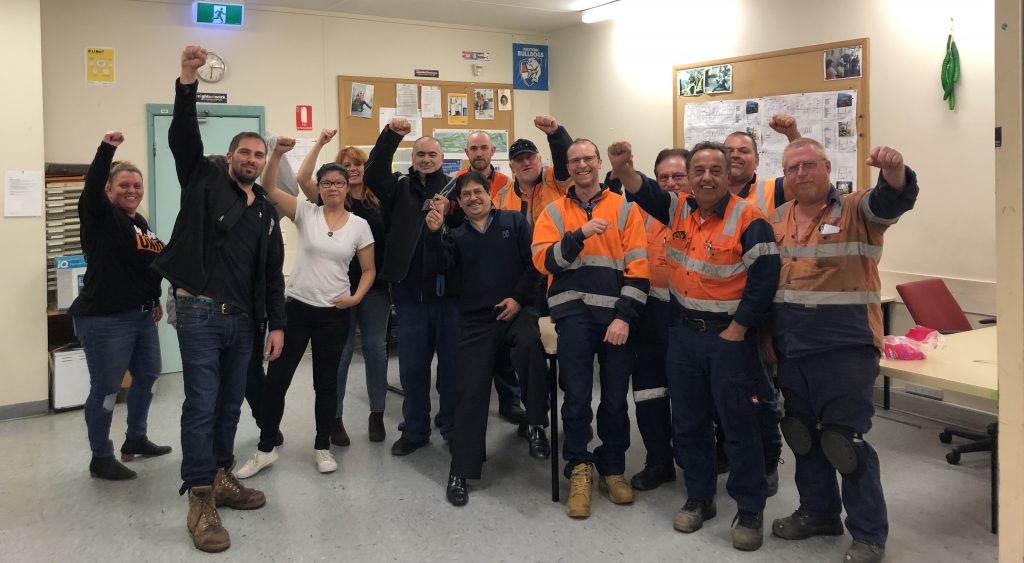 Organising is not always a clear-cut affair. It is an Organisers job to consult with, and represent the views of the membership, to park one’s own personal view of the situation, listen to members, refine often differing opinions, and relay that message back to management.

This can present some interesting challenges from time to time. For example when you’re sitting at the bargaining table and management make an offer regarding a replacement agreement, and that offer makes every inch of your being want to wretch and expel its breakfast across the table that you happen to be bargaining at. In this instance, one must pause, breathe, and take that offer back to the members. Funnily enough, that is exactly what I experienced at the bargaining meeting for the Metro Trains Melbourne (MTM) Rollingstock Agreement held on Friday 17 May.

Now just because we cannot act on our own opinions alone, doesn’t stop us from having one, and I personally couldn’t resist the opportunity to relay my personal view on MTM’s latest offer.

In terms of background to date, both MTM and the Unions (RTBU, ETU & AMWU) have spent the bulk of the time discussing and explaining our various claims and the reasoning for them. It has been no secret that the RTBU’s priority this agreement has been job security, skills and clauses that enable members to affect the outcomes of modernisation and recent investment in the railways.

So far some of these discussions seemed to resonate with both parties and potential clauses to cater for them explored. This screamed to a relatively sudden halt at the last meeting, when MTM out of left field decided quite suddenly that it was time to put the below offer on the table.

MTM’s proposes that if you agree to these conditions:

Currently, if MTM were to propose that a classification or grade were to be made redundant and that grade were redeployed to lower paying duties to maintain employment, the member would retain their current classification on an ongoing basis. In other words, you won’t be disadvantaged by the change.

MTM’s proposed change however, seeking that a limit of three months be imposed on this condition during a time of enormous modernisation, change and investment, where a skills pathway or plan has not been agreed but remains under heavy debate with the Unions, indicates that MTM stand to gain enormously from exploiting members whom they perceive as vulnerable to projected changes.

This compounds with MTM’s desire to change your rosters as they see fit while offering a substandard pay rise. It is my view that one does not need to be a clairvoyant to understand what MTM’s intention is here. However, a “trustworthy” source has reassured the unions that this claim and MTM’s roster change proposal are in no way connected.

Perhaps they are simply hoping that the bulk of members have questionable eyesight and that as a consequence the proposed increase to the reimbursement of prescription safety glasses will receive rave reviews.

Regardless of my personal view, the offer must be discussed with the membership. In order to do so, there is a meeting of Delegates from all unions being held on Wednesday 29 May. Please forward your opinion to your respective Delegate prior to the meeting so it can be taken into account.

Members must stand shoulder to shoulder this EA. This is not the time for division or petty squabbling. United we stand, United we will win.

10 February 2022 Dear Members, I am writing to inform you that after 12 years of representing RTBU Members, … END_OF_DOCUMENT_TOKEN_TO_BE_REPLACED

In what begins to define a new low for Metro, the RTBU has been forced to lodge a dispute over the company’s refusal to … END_OF_DOCUMENT_TOKEN_TO_BE_REPLACED

NO WAY METRO! The RTBU is fighting back against Metro's proposed cuts to frontline staff. Having received millions of … END_OF_DOCUMENT_TOKEN_TO_BE_REPLACED