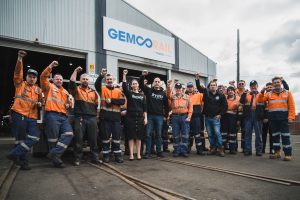 Industrial Action at Gemco South Dynon commenced last week, putting pressure on the company to abandon its unreasonable position at the bargaining table. Despite making a considerable profit last financial year, the company has refused to budge on reasonable claims that will see Gemco members gain conditions that other rolling stock members across the state have had since the turn of the century. Notably, an industry standard redundancy entitlement and the inclusion of five bonus days.

Gemco’s existing redundancy entitlements are sub-par. They offer a 16 week cap at 9 years service and drop to a 12 week cap at 10 years’ service. If the RTBU’s claim is accepted the redundancy would be capped at 21 weeks. As it stands only two members would be immediately affected by such a change indicating this is more about Gemco managements ego than any form of common sense.

The second outstanding claim of bonus days have been a staple of rail agreements for 15 years. The company initially proposed two days, subject to stringent KPIs. The RTBU bargaining team provided a counter offer that would see the full five days partially funded by members and see them phased in over a three year period, which the company blatantly refused.

Members at South Dynon have unanimously rejected managements current offer and responded by endorsing bans that restrict overtime, undertaking gauge conversions, use of personal tools and any change of roster.

Those bans are currently in place and will remain in place until further notice.

Members want an industry standard agreement, and they will fight to get it.

United we stand, Divided we fall

In what begins to define a new low for Metro, the RTBU has been forced to lodge a dispute over the company’s refusal to … END_OF_DOCUMENT_TOKEN_TO_BE_REPLACED

NO WAY METRO! The RTBU is fighting back against Metro's proposed cuts to frontline staff. Having received millions of … END_OF_DOCUMENT_TOKEN_TO_BE_REPLACED